Evangelist Evans Ochieng sent the following detailed report and photos related to his visit to Malawi in March 2022:

Pastor Dr Bob,
Greetings from Malawi.
My programme with Malawi and Mozambique of visiting all congregations both in Malawi and Mozambique has failed due heavy rainfall in both countries. The rain is falling heavily and the two countries is nothing but flooded in most areas. Roads are very bad except tarmac roads only. So going to Mozambique is a big problem. Even the brethren who managed to attend the Sabbath services from Mozambique were stopped by the flood that they couldn’t manage to go back. They are waiting till tomorrow to see if the water can be down so that they can go on boats. Since I entered in Malawi, it’s raining from morning to morning. The landing in Malawi wasn’t safe because of bad weather but the pilot was steady and at long last we landed safe. I kept Sabbath in migowi with leaders and members from nearby congregations. The meeting was very good. After the meeting I met all leaders from Malawi and Mozambique. We didn’t finalise because I had a lot to teach and share with leaders. So today we had services again and discussion and ORDINATION ceremony.
I was ordaning three deacons and molozwa in the ministerial work.
Here are three deacons who were ordained TODAY.
James Rabson
John Machemba
Louis Wahera
1- James Rabson – Deacon and in charge of Mozambique. Congregations under him are
1- Nagaga with 42 members
2- Domasi with 33 members
3- maulo with 53 members
4- Nasiyaya with 84 members
5- Miseu4 with 32 members
6- Nakhombe with 25 members

3 Louis Wahera Deacon and in charge of
1- Sunuzi with 83 members
2- Njenjette with 78 members
3- Taulo with 11members
4- Kachingwe with35 members
5- Migowi with 20 members
6- Chiringa with 24 members
7- Mulanje with 29 members
And pastor molozwa will be in charge of Mozambique and Malawi.
I appointed John Nkuhuleme from Mozambique to be church treasurer for both Malawi and Mozambique.
MOSES JIPANGWE was appointed church secretary for Malawi and Mozambique.
I also talked with them about tithing and offerings.
HOSTS
CHIRINGA—— JOHN NKHULEME — MALAWI

Since most of halls were damaged in both Malawi and Mozambique, assistant is needed for them to get iron sheets for the halls in both countries.
There are some congregations which are keeping Sabbath in the schools, but since those schools are falling under some denominations, sometimes brethren are getting it rough. So they need their own halls where they can keep Sabbath.
Evans 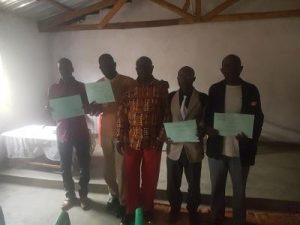 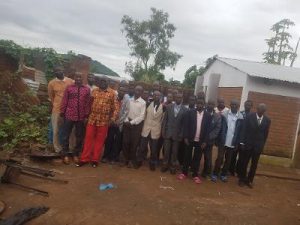 We just sent some funds for iron sheets so the members there can build meeting halls.

Greetings from Malawi
Let me report that the coming of pastor Evans has.contributed much for the proper foundation of the church both Malawi and Mozambique
During his he has ordained me to be a pastor
Brother wahela, machemba and James rabson has been ordained as Deacons in the church.

Greetings from Malawi and Mozambique

Let me report that we are unable to travel to Mozambique because of floods and the situation is very worse since the rain is still coming and brethren house crops have been washed away.
We have planned visit Mozambique in June when it dries up because we can’t manage.
Even leaders from Mozambique when they were going back it was a bad trip, some have found that their houses have fallen
Let us pray for Mozambique brethren
Best regards
Radson

Please continue to pray for those God is calling around the world and particularly in Africa.