They have began to visit several congregations there.

Evangelist Evans Ochieng sent in the following photo and information: 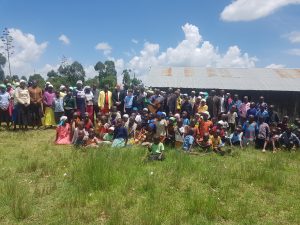 Later he sent the following:

Greetings from Kenya.
We had a wonderful meeting in Kisii.
Terry read more about in the new book (how the continuing church of God differs with Protestants).  It was a good message. No we are in Oyugis. Tomorrow we are going to Nyakach.  I gave Nyakach some food assistance when you sent money.
Evans

Receive greetings in the name of Jesus Christ, here in South Rift are doing well. We are thankful in the lord for enabling Brother Terry A Nelson to visit our area. The first meeting was done in Bomet where he managed to meet the groups of Bomet and Mau. The meeting was mainly attended by the representatives from these groups due to impassable roads. The groups of Bomet were thankful for support they had received in their church and are hoping for the cementing of the floor. The church of Mau is also doing well in faith despite the fact they are somehow unstable due to the fact that most have been evicted by the government from their homes and that most of them left their crops in the farm however others became comfortable when the government defined the boundaries of the forest, they were not affected. Even the pastor himself was affected and that he lives in the church with his family. The only difficult task that he has is to attend the flock given the area is hilly. However he is very much dedicated on his duties knowing that reward will come from the God alone. The flock has been scattered, he therefore move to assemble those nearer to each as cited from the bible none of them should not perish (Luke 15:3-6). My prayer is that before Passover Lord’s willing I will visit them on 15/2/2020. The report on the groups of Chilani is that the Sabbath meeting went on successfully. Evangelist Ochieng’ was given a chance to introduce the visitors where he introduced Terry Nelson and his two sons, the family of pastor also had a chance to be introduced to the visitors. After that brother Terry had time to teach the congregation on how the continuing church of God differs from the Protestants. There were also four brethrens from Protestants who attended the meeting and that they were very happy with the teachings of Brother Terry and that they could soon joined us. Secondly there were elders of the church of God 7th day who are not feast keepers from different churches and had a chance to interact with us. Indeed there was huge congregation since we had to allow only adults and to squeeze while sitting on a mat on the little remaining space inside the church while the children had to remain outside, we also expect for expansion in the near future as has been earlier said by the pastor. After the service, I was accompanied by the visitors to my house where they prayed to my grandson and thereafter Evangelist Ochieng’, church elders and Brother Terry gave hope that the child will get well. We are therefore thankful because the child now is improving. The sons of Terry got an opportunity to interact with the youth and shared a light moment whereby it is still in their minds up to date.  Brother Terry had an opportunity to interact with the women of Chilani called ‘‘Chilani light of Christ group’’. It is a year since the group was started and has been doing well. Their main work is to visit the orphans, the widows and the widowers and gave them a little assistance. Given the support to the group, they could do greater things (Philippians 4:3). After that, they left for the regions of Nyanza and we hope that next Sabbath of 22 Lord’s willing will be in the North Rift.

The brethrens of South Rift will not also forget to extend their thanks for the support they have received from you including the ongoing Kabolech Church the brethrens of Cheramgoi are also in need of a plot for the construction of the church.

Hi Dr Thiel, I meant to update you yesterday, but we didn’t have internet service: the trip is going great, were having an awesome time, the weather is perfect down here, on Friday evening we visited the Bomet church, there was about 20 or so members ; I gave about a 20 minute sermonette, they were all very excited to see us, they served us Kenyan tea with bread, it was very good, Andre video taped the entire visit and took pics;on the Sabbath we visited the Chilani church, there was about 100 or more there including children; they were also very excited to see us; I think I spoke about a half hour; Evans and another minister also spoke, after that we went into Paster Sawek’s house and they wanted me to pray for his grandson-he is having mental distress, I prayed for him … We then had tea and bread, and fellowshipped for an hour or so and took alot of pictures and Andre also videoed the time we were there. It’s almost 1am … Andre and Asher also speak for a few minutes each time we visit a congregation, and are having a very fun time, especially playing with the many children and video taping them.  Terry

Hi Dr Thiel, couldn’t write for few days, due to {lack of} internet service,; we visited the Kisii congregation, they were happy to see us,. It’s an area were a lot of bananas grow, the sweet kind, and also the ones that are like potatoes, very filling.  Later on when’s funds permit, a few elderly gentlemen want to start raising chickens for the congregation, I believe it would cost around 200.00; they also have bought the bricks for the bigger hall that will be built in the future.  Next on to Njakach, our poorest congregation in Kenya: before we leave we will be buying them corn to last a month and hopefully 40 or 50 chickens to help with meat and eggs; even though they are so poor, they managed to put on a big dinner for us; the hall they built is very nice it is all cement and brick; they have a brick mason in the congregation there: and he did a fine job in constructing it. They were very excited to see us also. Next onto the Ndhiwa congregation; this is on Evans land, a very fine hall is built here and has four upper rooms for people to stay; they were also very happy to see us; this is there big feast site is and is grand indeed. Evans is helping a lot of people and  is preparing this site to hold hundreds. We also toured Evans farm which has many vegetable crops and fruit trees.  Today we visited the Migori congregation, it is there smallest around 35 or so persons, but to us it is huge: a lady from this congregation has been in the church of God since 1976 with Worldwide. They were also very happy to see us; and we had a fine lunch and fellowship; well all is very well. I’ve been speaking close to an hour or so in each congregation, touching on different subjects, on our difference from Protestantism, tithing, enduring to the end, understanding trials and Christian living; the persecution now and to come. It’s greatly helping me feel closer to God; and his presence is greatly felt here. My son’s are greatly enjoying it.  You will have hours of video. A great work is being done here. More US brethren need to come here; it is very good.  Signing out now, almost midnight here. All of you God bless and take care.  Terry

Terry Nelson also sent a link with a couple of videos of singing in the Kisii congregation in Kenya: https://photos.google.com/share/AF1QipM1Lhr_ZuWqUaHxPr6nTe0EOARNbEgK0gn8leY2kt4kV72aApDvQiCVOmS68RUpxw?key=ZUV6NkQ5S0x4ZnBRM25SMHd6ajJ5dXFjSGlZM3p3

Terry Nelson also sent the following link which has many photographs of him, his sons, and CCOG Kenyans: https://photos.google.com/share/AF1QipPY4wIzqVG6drevYTNqdzbH7v1yGWtqXCBOcCDQHK1GMBjmeP4kw3uZloTi1we-MQ?key=NmdTSWk0VnVwQjRpUGlHbTNZUzZJVFdpN1YzMXVR 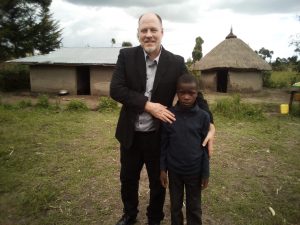 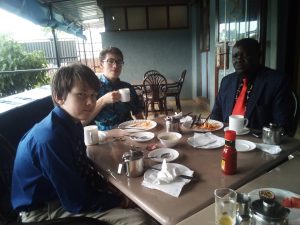 Terry Nelson, his sons, and Evangelist Evans Ochieng have more to visit in Kenya and also intend to visit Malawi and Mozambique later this month.